I’m a Charleston based wedding photographer but I absolutely love to travel! I create timeless, joyful & tangible memories for my clients.

Courtney and Phillip’s story began over a decade ago when they met while working at the Outback Steakhouse. They immediately became friends, and when Phillip moved to Asheville, NC, he would visit Courtney and starting dating before the two realized that they were dating. They made it official in January 2015 that they were together and have been inseparable ever since.

In 2018, Phillip asked Courtney for her hand in marriage in front of their friends and families at their home. With the help of Courtney’s sister, he came up with a cover that they had planned an anniversary dinner for her parents and that they were hosting it at their home. He even enlisted Courtney’s cousin’s help to do her hair and makeup and take her out for a day of pampering. After spending the day getting pampered, she arrived home to find out that Phillip, along with her family and friends, had pulled off the ultimate surprise, and Phillip proposed.

When I first chatted with Courtney over the summer and told me about her and Phillip’s love story and how he proposed, I just knew that these two are the very best of friends. She told me all about their son and that they work together in real estate and how they both love Charleston, but most importantly, how much they love their tequila. So when I arrived at the River House at Lowndes Grove to capture their day, I was not a bit surprised to find that they had tequila and their favors were the cutest little bottles of tequila.

Their day started with them getting ready at the River House, and although you are not supposed to see each other, being best friends first and foremost, they could not help but take a few shots together. Of course, we made sure that Phillip locked himself in the other room when it came time to get Courtney in her dress so that they could share a sweet first look and believe me, it was one of the most endearing first looks ever.

We took a few minutes to take some bride and groom portraits before the two made their way back to the River House to hide while their guests arrived. The weather could not have been more perfect on this beautiful November day in Charleston, and their ceremony in front of the water under beautiful oak trees. They stood in front of a stunning arbor full of greenery and white and burgundy flowers; the color scheme was right on point.

After the two said “I do,” shared their first kiss, and made their way back down the aisle, we took some family portraits before sneaking off for some dreamy sunset portraits on the dock at Lowndes Grove. The sunset was incredible and made for the perfect husband and wife portraits. After we finished, the two cheered to a shot of tequila, and the party got started, well after dinner was served, of course.

Their reception did not disappoint, everyone danced their butts off, and there was not a person who did not have a smile from ear to ear. It was such a fun evening filled with tons of love and joy. The two then exited their reception with a sparkler line and drove off by the most romantic vintage vehicle from Lowcountry Valet.

So without further ado, I would like to share with you a few of my favorite images from their special day! 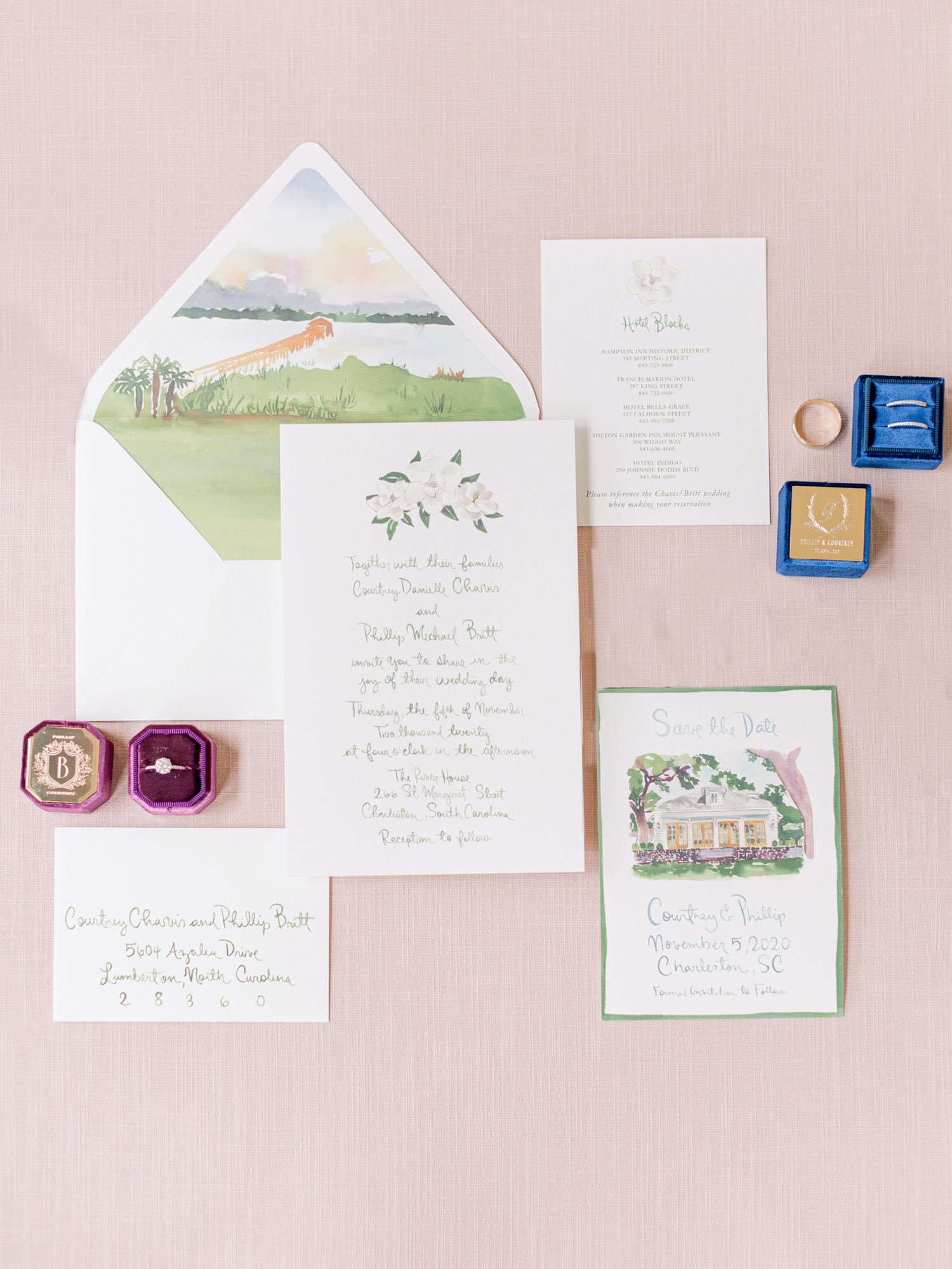